In the run-up to each release of iOS 14, 14.5 and 15, Armageddon (of some sort) is always predicted, but reality rarely matches our deepest marketing fears.

It’s good to remember that even though every new Apple feature is significant, a large portion of the population does not own an Apple device. According to Statcounter, iOS is the top mobile operating system in the US with 57% market share. So 43% are unaffected. Approximately 20% of the 57% of users are using an older operating system released more than nine months ago.
57% x 20% = 45.6%
Our mobile traffic COULD be affected by Apple’s latest changes by roughly 46%. Among those, only those using Apple Mail will be impacted. Based on my research, Apple Mail has something like a 40% market share of the mail apps. Marrying those 2 stats is a bit problematic, but the main point is that if 57% of the US uses iOS but only 40% use the Mail App that’s markedly less than 46%. Let’s assume it’s about 30% less (between 40% and 57%) than the traffic related to iOS.

To Review, the Key iOS 15 Changes Being Made Are:

Let’s Review What Won’t Change Based on These Changes Before We Start With the Data:

Now that we’re about 1 month into iOS 15’s release, we took a look at a few of our emails to see if we could identify any trends. We compared a list which goes to a large (over 200k daily) audience, and the subject lines are set for each of our 365-day devotional emails. In other words the subject headlines are NEVER connected to news and outside influences.
Here are the open and click rates for the 5 days just before iOS 15 was released: 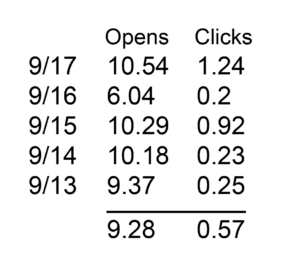 And here are the open rates for a recent 5-day stretch: 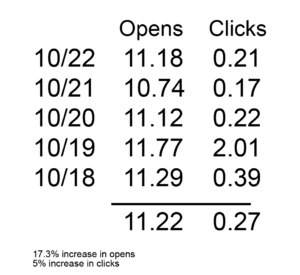 What is important to note is the 17.3% growth in opens. Some or perhaps all of this increase could be attributed to the adoption of iOS 15 Mail apps.

Here Are a Few Actionable Tactics for You:

Email geo-targeting on iOS does not affect our clients. Each Outreach Media Group email subscription is 100% opt-in (more valuable), and we collect location-based data on the sign-up form. All subscriptions are geo-tagged by country/state. We’re also using segments of iOS/non-iOS email subscribers to create relevant subject line tests.
As faith-based marketers, we strive to do and help others to do “smarter marketing.”  May you be just 1% more effective today!
Steve Foster2021-11-23T19:48:59+00:00

About the Author: Steve Foster

Steve Foster is the Chief Operating Officer for Outreach, Inc.