What Advertisers Need to Know about Implicit Memory 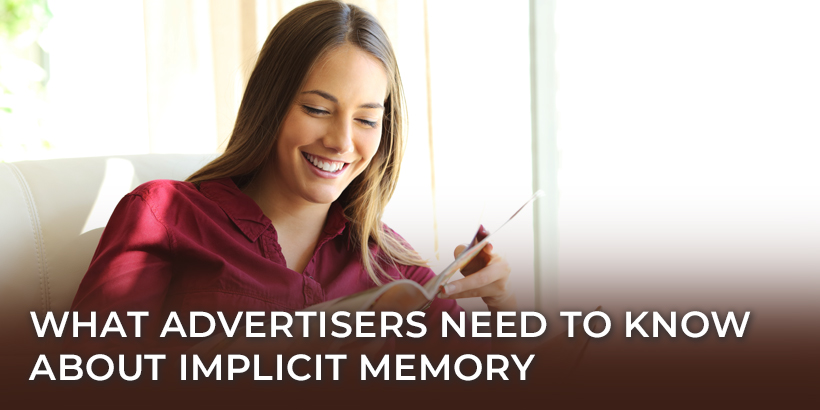 It’s notoriously difficult to measure the full value of print ads. It’s simply impossible to track every conversion or to measure the impact of exposing your audience to your brand.

But that doesn’t mean print ads aren’t valuable. In fact, they play a vital role in branding, and psychology teaches us that even when people can’t explicitly recall your brand or remember seeing your ad, they can be influenced by what’s called implicit memory.

Implicit memory is when we don’t consciously recall something we’ve seen, but our behavior—such as the recollection of words and images, or a preference for one item over another—demonstrates that we clearly remember what we saw on a subconscious level.

As you can imagine, that has huge implications for advertisers.

Consumers remember ads, even when they don’t

Dr. André Melzer, a psychology professor from the University of Luxembourg, used a series of tests to measure implicit memory. He says “findings showed that an early incidental exposure to content (such as advertising) leaves memory traces, which, as impressions on a subconscious level, may affect or even determine behaviour.”

In other words, someone may choose your brand over a competitor simply because they’ve been exposed to your brand in an ad—even if they don’t remember seeing it.

Melzer uses a hypothetical situation at a supermarket to show how implicit memory works. Suppose someone shows up at the store just before closing, and they forgot their shopping list. The choices consumers make in this situation can be subtly influenced by “the sense of familiarity with the brand that resulted from the contact with a billboard ad that was encountered earlier on the way to the supermarket may affect the decision under time pressure.”

That’s why it’s so important to put your brand in front of your target audience, even if you don’t see an immediate spike in sales.

Being seen by the right people makes a difference

Implicit memory is highly related to what’s called the “mere exposure effect,” a phenomenon in which simply being exposed to something can develop a preference for it.

A 2007 study (referenced in Melzer’s research) found that when people were shown pictures, some of which included a billboard with a made-up brand of candy called Pfeffi, they later preferred that candy to a made-up brand of lemon drops.

The subjects were asked to rate the locations in the pictures to help determine which would be more appealing to tourists. No one directed them to look at the billboards, and they were concentrating on an unrelated task. The ads were just there, in the background.

“A control study illustrated how strong the effect in favour of ‘Pfeffi’ really was,” Melzer says. “When there had been no exposure with a certain brand of sweets, the spontaneous choice for candy was clearly in favour of the lemon drops. The mere exposure effect triggered by the billboard advertising was thus clearly stronger than the ‘natural’ trend of behaviour.”

If your ad is especially good, or they see you next to brands they know and love, they may assume your product or service is good as well . . . but even if they don’t focus on your ad or remember your name later, that exposure has value if they ever need to make a choice in your product category.

Don’t underestimate the power of print

It’s true: it’s harder to track sales from print ads. Your audience can’t just click a link and convert. But print ads also last longer, create stronger brand recall, and often come with a higher degree of trust. And while you’ll probably never measure your audience’s implicit memory of your brand, you benefit from it all the time.