Why Video Captions Are a Must 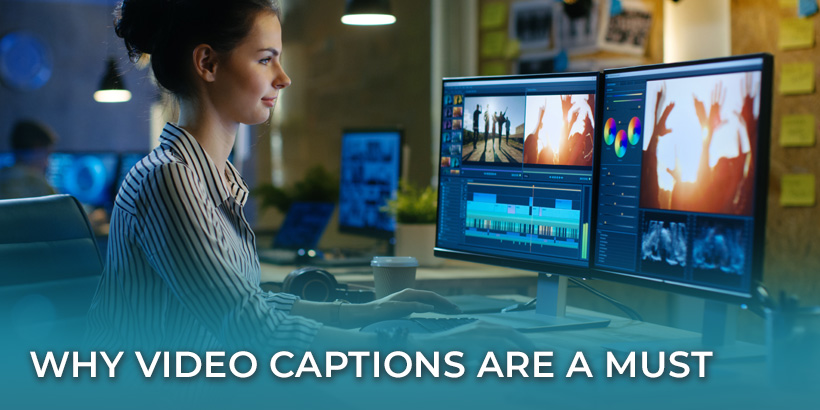 Creating videos is expensive. Even relatively low quality videos can take up a ton of time and resources to produce.

A high-quality video could take weeks or even months of time from producers, directors, camera crew, editors, motion graphic artists, and actors, not to mention the costly equipment and software needed to capture and edit the footage.

When all is said and done, you might think not captioning your video is an easy way to cut down costs. But especially when your videos cost a lot of money to produce, you can’t afford not to create captions.

Sometimes the sound isn’t on

You have seconds to convince someone to watch your video. Hopefully, the footage or motion is captivating on its own. But if you don’t have captions, some people are going to miss your hook!

This is especially common on Facebook, where videos autoplay as people scroll through their newsfeeds. If they haven’t just watched a video, the sound is off by default. Your video’s motion may naturally hold their attention for a few seconds, but until they’ve committed to turning the sound on and hearing what your video has to say, that motion is your only shot at getting them to stick around.

And keep in mind: sometimes people watch videos in places where they can’t play the audio. If they don’t have headphones and they’re in a public place, they’re going to watch your video on mute. And if your video can’t capture their attention without the sound, they’re going to keep scrolling.

Captions increase the likelihood that people will be drawn in and choose to turn on audio, and it gives people an option to enjoy your video when they can’t turn it on. And if you’re already spending money on videos, you want as many people as possible to actually watch them.

Just because someone is hearing impaired doesn’t mean they’re not in your target audience. But if you don’t have captions, you’re basically counting them out. Not only do they not get to know what you have to say, but it communicates that you don’t care about them. Even if your product or service directly applies to them, they’ll completely miss your message.

Captioning your videos takes more time and money, but it also ensures that your videos are accessible to your entire target audience.

Sometimes audio can get muffled

Even a well-produced video can have moments when the audio is difficult to make out. People talk too fast or squeeze a word out mid-breath. Or background noise or music interferes just enough to cover up a word or two.

But there’s another way listeners can miss words here and there, and it’s not in your control. You don’t know what kind of environment they’re in when they watch your video. Maybe it’s noisy. Maybe their child is yelling at their feet or someone else in the room is watching TV. Or they’re in a coffee shop and listening to your most important line right as the barista turns on the blender.

Captions ensure that you get the most out of your videos, because more people will:

So make sure your video budget always leaves room for closed captioning.